In 2014 Omaha Public Library  named The Meaning of Names as the Omaha Reads. selection. In 2016, the Nebraska Center for the Book chose The Meaning of Names for the state-wide reading program One Book One Nebraska. These honors led to invitations to dozens of book clubs in the greater metro area and beyond. Book clubs ranging in size from 5 to 250 have invited me into their midst to talk about the family stories and history behind the writing of the book. If you're interested in an author visit to your book club, please contact me to set up a time. 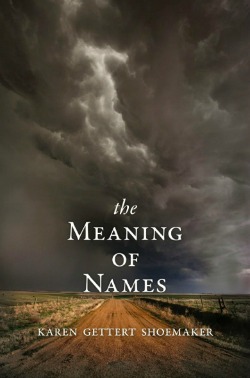 Though The Meaning of Names is a slim volume, it is thick with ideas and themes that can spark spirited discussions at book clubs. As you read you might consider some of the topics addressed in the book: women's rights and roles; the nature of grief; attitudes toward citizenship and immigrants; patriotism; the importance of family and community; patriarchy; the institution and reality of marriage; changes in medical practices; themes of reconciliation. spirituality, illness and death.

The following questions may help your group dig into the book, but do leave time for book club members to share their own stories. In my experience with book clubs, those personal stories are fascinating!

1. Reconciliation is a key theme in this book. Near the beginning of the novel the main character, Gerda Vogel, returns to her childhood home to attend her aunt’s funeral and attempts to reconcile with her parents. Given the portrayal of Gerda’s parents during that visit, do you think reconciliation is possible? Why or why not?
2. The historical period of this novel deals with the era of America’s involvement in WWI. As portrayed in this novel, what are the effects of the war on American citizens and immigrants? How is this view of WWI different from or similar to other accounts of WWI that you have come across? How is it different from or similar to accounts of other wars that America has engaged in?
3. The character, Dr. Ed Gannoway, claims he does not believe in God and yet he regularly attends church and is active in the church community, why? What events in his life have contributed to his beliefs about God and the spiritual life? Is he changed by the events in the novel? If yes, how?
4. What adjectives would you use to describe this novel? Given the bleak subject matter - war, prejudice, illness, death -- is the novel’s view of the world negative or positive?
5. The book begins and ends with a birth scene, how is Gerda’s life and the choices she makes affected by her experiences with the death of her sister in childbirth?
The infant mortality rate was much higher in the early 1900s than it is today in modern countries, and birth control was virtually inaccessible to rural and poor women so for a woman like Gerda to have sex was to hazard death. How does that color your feelings about the love scenes in the book? Does the book seem to be making a statement about women’s rights or women’s lives? If so, what sort of questions?
6. When the woman at Kroger’s confronts Gerda when she stops in to deliver the eggs, Gerda is shocked that a woman could be a part of the evils of the war. Are her feelings about women a result of naiveté about  humanity? Why do you think she was shocked?
7.  What does the character of Father Jungels represent in the novel? Does he grow throughout the course of the novel or does he remain rigid in his beliefs? Do the events in the novel support his beliefs in the end? If so, how?
8. The point of view of the narrative shifts between characters, sharing time with Gerda Vogel, Dr. Gannoway, Fritz Vogel and John Kaup. Who is the main character of the novel? Which characters are changed by the events in the novel? How are they changed?
9. Through much of the novel Gerda and Fritz are struggling with being honest with each other - Gerda hides the truth of what happened with her father on her trip to West Point and Fritz hides the truth about the draft notice from Gerda as long as he can. Despite that, do you thing they have a happy marriage? Given the realities of the era and the location, is happiness within a marriage necessary?
10. The novel is set in the heart of the country - the Great Plains of the Midwest. It is a region of magnificent storms and great distances, prone to extremes of heat and cold. What role does this landscape play in the novel? Are these characters unique to the region or are they more universal?
11. When the young Gerda runs after her father at her sister’s funeral at the end of the opening scenes, the narrator’s voice asks, “How could she know the inexorable scar that formed even as she ran? The loss of a language that would take decades to recall? In what ways do ” Scar” and “language” both serve as metaphors for something that is lost in the beginning of the book.
12. What did Gerda lose when her sister died? Does she re-find it by the end of the novel?
13. Letter writing plays an important role in the lives of the characters in this novel. Gerda and her sister Katherine regularly write letters back and forth. It is Gerda’s enthusiasm to get Katherine’s letters that lead to her friendship with Charles Burke, the mailman. Gannoway has carried on a life-long letter exchange with his brother Lark, which he considers an important part of his ongoing education as a doctor. In what other ways does the correspondence between characters play a role in characters‘ lives? How has correspondence between people change in the past century?  How are letters, which take a certain amount of time between the sending and the receiving, different from modern forms of communication such as e-mail or texting?
14. Another important method of communicating in this novel is the newspaper. Fritz learns his draft number has been chosen when he reads about it in the paper. What effect does this slow flow of information have on the quality of the characters’ lives?