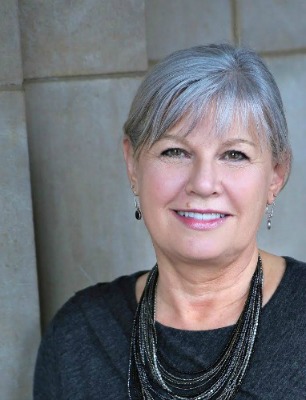 Need an author photo of Karen Gettert Shoemaker? Feel free to click on the image to download this one.

Looking for information about Karen's career? You've found it here.

Provided below are two options: a short version of her bio (for introductions and the like), and a longer version with a little more information (for small talk at cocktail parties and such).

If all you need is a tagline, "Karen Gettert Shoemaker is the author of The Meaning of Names and Night Sounds and Other Stories" works quite well.

Karen Gettert Shoemaker is the author of the novel The Meaning of Names and the collection Night Sounds and Other Stories. Her novel was selected for the community-wide reading programs One Book One Nebraska, 2016, and Omaha Public Library’s “Omaha Reads” 2014. Her short story collection received a Nebraska Center for the Book Award in 2003. She is a faculty mentor at UNO’s MFA in Writing Program and founder of Larksong Writers' Place Workshops.

Karen Gettert Shoemaker is the author of the novel The Meaning of Names (Red Hen Press, 2014), the One Book One Nebraska selection for 2016 and Omaha Reads selection for 2014. Her award-winning collection of short stories, Night Sounds and Other Stories was published by Dufour Editions in 2002, and re-published in the United Kingdom by Parthian Press in 2006.

Her fiction and poetry have been published in a variety of newspapers and journals, including The London Independent, Prairie Schooner, and South Dakota Review. Her work has been anthologized in A Different Plain: Contemporary Nebraska Fiction Writers; Nebraska Presence: An Anthology of Poetry; Times of Sorrow/Times of Grace; and An Untidy Season.

Shoemaker is a graduate of the University of Nebraska where she received a Bachelor's Degree in Journalism, and both a Master's Degree and a Ph.D. in Creative Writing. Awards for her writing include a Nebraska Press Association Award for Feature Writing, two Independent Artist Fellowship Awards from the Nebraska Arts Council, and a Nebraska Book Award for Short Fiction.

She has taught creative writing and literature classes for more than 20 years and is currently a faculty mentor with the University of Nebraska - Omaha’s MFA in Writing Program. She is the founder and director of Larksong Writers' Place Workshops.

The Untidy Season The Backwaters Press 2013

Nebraska Presence: An Anthology of Poetry The Backwaters Press 2007

Times of Sorrow/Times of Grace: Writing by Women of the Great Plains/High Plains The Backwaters Press 2002